Crime Levels are Higher Among Kids from Fatherless Homes

Children reared in fatherless homes are more than twice as likely to become male adolescent delinquents or teen mothers, according to a significant new study by two economists at the University of California, Santa Barbara.

Llad Phillips and William S. Comanor based their research on data from random surveys of 15,000 youths conducted annually by the Center for Human Resources at Ohio State University. Their findings suggest that current proposals to provide tax credits and exemptions for single mothers and to collect more child support from absent fathers will
have little effect on the problem of delinquency among teenage boys.

“Both measures tacitly accept the father’s absence from the home and seek to ameliorate its consequences by increasing the income available to mother and child. However, it requires an increase in family income of approximately $50,000 to counter the father’s absence,” the economists wrote in a report outlining the results of their study, which were presented at the Western Economics Association meeting in San Francisco on July 1.

Phillips and Comanor designed their study to account for the influence of income, and found that in the case of boys, a minimum of $54,000 in additional family income is necessary to counter the harmful effects of absent fathers. For girls, the figure is much lower-$17,000 a year.

The researchers also found that while absent mothers have a negligible impact on male adolescent delinquency, motherless homes are 56 percent more likely to result in teen pregnancy among girls.

“The absence of either parent has a significant effect on the kids having one kind of pathology or another, but the absence of a father tends to have a more significant effect, and it seems to more seriously affect the sons,” said Phillips, whose research also indicates that step-fathers may in fact contribute to the problem.

“The effect of the presence or absence of moms and dads on childbearing at a young age among girls are more equal than their effect on delinquency by boys.”

“A lot of kids get involved in crime long before they are able to make rational choices about crime vs. legitimate work,” Phillips says. “And that’s our motivation in doing this research-finding out the importance of the family in the whole process.” 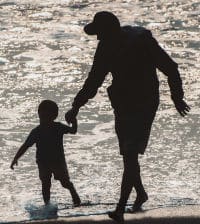