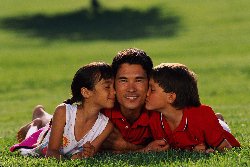 Today a quiet but thoroughly monumental revolution is taking place in the American family. The number of fathers solely responsible for the care of their children is growing at a rate almost twice that of single mothers. Fully one-fifth of single parents today are single fathers — more than 2 million of them.

This is up from 1970, when single mother households comprised approximately 90 percent of the single family population. Among minorities, the rate of increase is as high, or higher: between 1970-1995, the rate of African-American single dads increased 329%; for Hispanic single fathers, 450%. And though the media almost always focus on mothers when portraying working single parents, nearly 30 percent of working single parents are now men. — Jeff Gillenkirk, in A Revolution in American Fathering