gives his views on romance and parenting 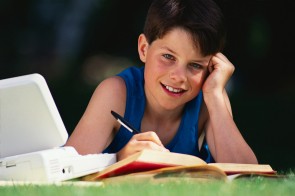 John is in his forties and has raised his 11 year-old son Stefan
himself. John has never lived with Stefan’s mother. She is a journalist
and travels a lot, but maintains her relationship with Stefan.
John says he would now like to have another child.

FatherMag: So tell us how you became an intentional single
father.

“I reached an agreement with a woman friend of mine who wanted
to have a child, but didn’t want to raise it herself.”

FatherMag: You just wanted to raise the child yourself?

“I wanted Stefan’s mother to stay involved with him, but I wanted him to live with me. And I didn’t ever have a romantic involvement with Stefan’s mother.”

“People fall in love and think ‘We’ll get married and it’ll last forever.’ But they’re just gambling with their own future and their kids’ futures. The truth is, people don’t stay married any more. They separate in a fury that’s just as hot as their love once was, and it’s the kids who really get burned. Romance is by nature often a fleeting, temporary kind of thing. A child needs stability. So I didn’t want a romance with the mother of my child.”

FatherMag: So you will never have to stay with someone you don’t like just for the sake of the child.

“Right. And Stefan can count on both me and his mother always being there for him. She and I have never been in love, so we never have fallen out of love.”

FatherMag: Some people might say a child needs to see parents in a loving relationship.

“Ideally, yes. But look at what kind of relationship many
kids see their parents having. My son sees my love relationships,
and if a relationship comes to an end, it doesn’t mean he loses me or his mother.”

FatherMag: Has he seen so many relationships end?

Laughs. “I’ve had three relationships with women since he
was born. One serious, two short-lived ones.”

FatherMag: Was it ever a problem for him when you broke off a relationship with someone?

“Sometimes, yes. But it never cost him his father or his mother.”

FatherMag: So now you want to do it again?

FatherMag: A different mother this time?

“I don’t have any choice. Stefan’s mother is at the peak of her career, and she doesn’t want it interrupted by a pregnancy. At least with this arrangement she’s been able to have both child and career. She’s seen all her female friends end up with bitter family breakups or facing conflicts between having a career and having children.”

FatherMag: I don’t think all women would be happy just being a weekend mother.

FatherMag: You say you want to do it again. That implies that you are pleased with the result.

“Yes, I am. I think people who let romantic relationships get mixed
up with raising children are being impulsive and self indulgent.
They usually end up creating a lot of stress and unhappiness for
themselves and their kids.”

FatherMag: Some people might say your approach isn’t the ‘natural’ way of doing things.

“Neither is flying, except for birds. But a lot of people will get in an airplane if it takes them where they want to go.”

FatherMag: I guess the bottom line is: Is it good for the
kids? –In the long run?

“My son has had a good, stable relationship with his mother. He’s never had to panic because of seeing us in a lover’s quarrel.”

FatherMag: So you think more people should try it?

“Absolutely. Otherwise people are just making trouble when they fall in love and start making babies. Romance is not a stable basis for building a family. Making love and making families are two different things. Ancient cultures have known this for centuries. It’s the foundation of the arranged marriage. My family is a planned one. My love affairs don’t threaten it.”

FatherMag: Maybe it’s not a family if you have never lived
with your son’s mother.

“His mother is crazy about him and has always been there for him, and the same goes for his grandparents on her side.”

“He knows that’s not what she wants, and not what I want.
So he doesn’t see it as a possibility and doesn’t dwell on it.
Compare that with the kid who’s always hoping that maybe his parents
will get back together. Maybe they do, two or three times. Why
put a kid through that sort of torture? Like I say, making babies
with your lover is short sighted, self indulgent and just plain
irresponsible. And like all self indulgence, in the long run it’s
less fun, not more.”

Single fathers by choice may find they have a lot in common with Single Mothers By Choice.