Interview with a man and his son 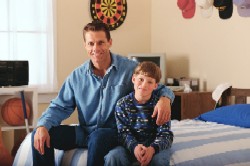 Bob has raised his 9 year-old son Kyle entirely by himself. Kyle’s mother abandoned them when

FatherMag: Did you find it difficult raising a child entirely
by yourself?

“Sometimes. The first six months were the most difficult.”

“Adjusting to all the changes in my life. Babies are sometimes
challenging creatures anyway.”

FatherMag: So tell us why you have stayed single.

“I guess it was because I just couldn’t find the right woman
to be my partner.”

FatherMag: Were you tempted to grab the first available
woman who walked by and marry her?

“In the beginning, it was only good luck that prevented me
from doing just that.”

“Yes. A hasty choice would have probably been a disaster.
I finally realized that finding a stepmother for Kyle wasn’t the
right reason for choosing a mate.”

FatherMag: Does Kyle have a mother now?

“Just a picture hanging in his bedroom. We’ve never seen her
since the day she left. There were a couple of letters in the
first few weeks after she left, then nothing.”

FatherMag: What special problems do you think your son has
experienced?

“I don’t know. So far as that goes he just seems like a normal boy to me.”

FatherMag: What would you change if you could do it again?

“At the time, I thought fate had played a cruel trick on
me. But now I am happy to have been a total parent.”

“Yeah. Most fathers are just sometimes fathers. They just
fill in when mom’s doing something else. I’ve been totally committed
to my son.”

FatherMag: Does that make parenting easier, or harder?

“In some ways it’s harder, but in some ways it’s easier too.
I can chose I want for him. I don’t have to get a woman’s
approval before taking him somewhere or about how I cut his hair or
whether I should buy him Nikes. I have a friend who has been arguing
with his wife for three years over whether it’s morally right to buy
Nike shoes for their kids.”

FatherMag: A single mother might make the same argument for remaining single, saying, “It’s simpler when you can just do things your own way.” But a case can be made that boys really do better if they have fathers.

“So maybe girls do better if they have mothers. But seriously,
there are two issues here, Kyle having a mother and me having a mate. It’s only if I move someone into my house that the two issues really interact. And Kyle can still have a mother even if I’m single. Someone who plays a mother role in his life. But he hasn’t found that person yet, and I don’t know if he’s even looking for her.”

FatherMag: Do you mean if he had a special friendship with
a woman, like a teacher or neighbor, that you would have to accept
it?

“Sure. I think that if he finds someone who meets his needs,
fills his longings, then I would be glad to see that happen.”

FatherMag: But you wouldn’t marry her and make her his stepmother?

“Sure I would, if that happened to be the way things worked
out, but that is presuming a lot! It’s not that I have decided to stay single; it’s just that I haven’t let Kyle be a reason to rush into a marriage.”

FatherMag: Would you say that his presence makes you more careful about getting seriously involved?

“Sure. And the fact that I have a child probably makes any prospective mate more careful as well.”

FatherMag: What do you think would Kyle say if I asked him what it’s like having no mother?

“Why don’t you ask him yourself?”

Bob calls Kyle in from where he’s playing outside. We’ve already been introduced, but I still must explain to the boy that though he’ll remain anonymous, his answers will be made public. When I’ve made it clear and he seems comfortable enough to talk, we proceed. Bob excuses himself, and leaves us sitting alone.

FatherMag: I’m trying to find out what’s different about growing up with your father, instead with a mother and father.

“I don’t know. A lot of kids live just with their mother, so what’s the difference?”

FatherMag: You tell me. Is it different?

FatherMag: With a father, you mean.

“Yeah. Most of my friends are always saying I got lucky. They’re always complaining about how moms don’t understand.”

“Anything. I mean some of the moms are bitchy, and some are nice, but none of them were ever a boy. So mostly they just have stupid ideas.”

FatherMag: What if your father got involved in a relationship with a woman, and you then had her as a mother? Would that be good or bad?

“Depends. On whether she’s bitchy or whatever. She could be okay, I guess.”

FatherMag: It doesn’t sound like you’re rushing him to go out and find you a new mom.

“No. But he has a girlfriend, and I know he sometimes has said things like he wants a woman to live with us.”

FatherMag: Would you try to stop that from happening?

“I don’t know. Sometimes I picture a real nice mom with nice eyes looking at me. And then sometimes it really happens when we’re out in a store or wherever, I’ll look at somebody, and she will look back at me that way.”

FatherMag: How does that make you feel when that happens?

He and I both laugh at his joke, but I know he has shared some personal feelings with me. After departing, I can’t help thinking about how having a son has influenced Bob’s relationships. I’m sure it gets in the way sometimes, but then Bob has put his priorities in the order he wants. And who knows, maybe someday Kyle will go up and talk to a woman with magic eyes…