It is fatherhood that makes childhood possible.
by Daniel Amneus 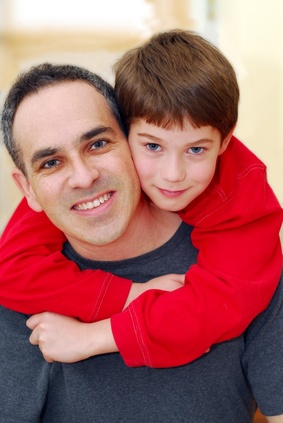 A judge will try a divorce case in the morning and place the
children in the mother’s custody. He will try a criminal case in
the afternoon and send a man to prison for robbing a liquor store.
The chances are three out of four that the criminal he sends to
prison grew up in a female headed household just like the one he
himself created that morning when he tried the divorce case.[1] He
can’t see any connection between the two cases. The time lag
prevents him: the kids he placed in the mother’s custody were
toddlers and the criminal he sent to prison was in his teens or
twenties. Toddlers don’t rob liquor stores.

This is the “safe drunk driver argument.” Most drunk drivers
don’t get in accidents. They get home safely and sleep it off.
Therefore drunk driving is OK.

It’s not OK. And exiling fathers from families is not OK.
The fact that will not go away is stated by sociologist David
Popenoe in his book Life Without Father:

The negative consequences of fatherlessness are all around us.
They affect children, women, and men. Evidence indicating
damage to children has accumulated in near tidal-wave
proportions. Fatherless children experience significantly
more physical, emotional, and behavioral problems than do
children growing up in intact families.

Why do Judges routinely award custody of children to mothers
when they try a divorce case? Two reasons. The first is that
motherhood is more solidly based in biology. Motherhood is a
biological fact, as Margaret Mead says, fatherhood merely a social
invention. Mammals and motherhood originated two hundred million
years ago, when the dinosaurs were young. Fatherhood in the sense
of major male participation in reproduction is, from the point of
view of evolution, a recent development. Fatherhood in the sense
of male headship of the stable patriarchal families which make
civilization possible is only about five thousand years old, as
feminist Dr. Gerda Lerner has shown in her book The Creation of
Patriarchy. Prior to the Patriarchal Revolution human reproduction
followed the ghetto pattern, where the mother was the primary
parent, and the father was a mere boyfriend who could be discarded
when the mother got tired of him.

The second reason why judges favor mother custody is their
recognition that women and children are dependent creatures. This
was formerly understood to mean they needed husbands and fathers.
But husbands and fathers require authority if they are to function
as providers and protectors. (“He shall rule over thee,” God says
to Eve, Genesis 3:16.) Without the sexual loyalty of wives there
can be no family. Patriarchal civilization depends on female
chastity. Without it men cannot have families and children cannot
have fathers.

This is the hitch, the reason we have a feminist revolution:
Females dislike sexual regulation. Feminists say “A woman needs
a man like a fish needs a bicycle,” “A woman has a sacred right
to control her own sexuality,” “End human sacrifice! Don’t get
married!” Women’s primary object, according to feminist Anne
Donchin, is to create a society in which “women can shape their
reproductive experiences to further ends of their own choosing.”

no longer makes any attempt to buttress the stability of
marriage or any other union. It has adopted principles for
the protection of children and dependent spouses which could
be made equally applicable to the unmarried. In such
circumstances, the piecemeal erosion of the distinction
between marriage and non-married cohabitation may be expected
to continue. Logically we have already reached a point at
which, rather than discussing which remedies should now be
extended to the unmarried, we should be considering whether
the legal institution of marriage continues to serve any
useful purpose.

The emphasized sentence means marriage no longer grants the husband
any rights whatever–only the obligation of giving up his children
and accepting slavery–laboring for the benefit of another person,
his ex-wife. (Or equally his ex-girlfriend, since marriage makes
no difference.) “The courts have abandoned,” says Ms. Hoggett,

the concept of breach of matrimonial obligations–and their
powers of adjustment of property interests in the long term
are now so extensive that ordering one spouse from his own
home no longer seems so drastic. Far from ordering spouses
to stay together, courts are increasingly able and willing to
help them separate.

This is the female kinship system, matriarchy, the condition of
the ghettos–made tolerable for the female by the male’s acceptance
of slavery.

A Georgia judge named Robert Noland shows how the legal system
thinks: “I ain’t never seen a calf following a bull. They always
follow the cow. So I always give custody to the mammas.” The
reason Judge Noland never saw a calf following a bull is that
cattle don’t live in two-parent households. If we want to live
like cattle, Judge Noland has the right idea. But human beings
differ from cattle and the difference is created by fathers.

A green turtle–a reptile–begins its existence as an egg and
never learns it has a mother or a father. Its mother’s
participation in its existence consists of conceiving and gestating
it and burying the resulting egg in the sand. After remaining
there and maturing awhile, it emerges from the sand and waddles
down to the water to find a meal–or to become a meal for some
other creature. It is self contained and lives on its own
inherited resources or it dies.

Mammals came into existence during the Age of Reptiles.
Mammalian mothers cherish their young, feed them from their own
body, protect them, educate them. If you have a cat with kittens
you can witness how mammalian motherhood works–how meaningful
motherhood is, and how irrelevant merely biological fatherhood is
once the father has performed his minuscule sexual function.
Motherhood enables the kitten to have an infancy. This is the
relationship which Judge Noland understands and seeks to preserve
by awarding custody to mothers.

The kitten has no childhood. After a rather short period of
helpless infancy, the kitten is almost suddenly a mature adult
capable of fending for itself like the baby turtle after it emerges
from its egg.

It was John Fiske, the nineteenth century American historian
and philosopher, who pointed out what made human beings special–
and more successful than other mammals: the prolongation not only
of infancy, but the creation of a whole additional era of life,
childhood, something unknown in any other species–so that human
children can enjoy an enormously long period during which they are
protected, cherished, educable, playful, exploratory, sensitive and
aware, a period during which they can reach out and learn about and
come to love the world they live in.

It is fatherhood which makes childhood possible. It is father
absence which creates ghettos and gangs and messed-up kids–boys
trying to find their identity through violence, girls trying to
find their identity through sexual promiscuity, which will lead to
the violence of the next generation. They need real fathers,
“sociological fathers,” not mere studs interested in sharing a one-
night stand with Mom.

Until lawmakers and
judges see that they must support the father’s role because it is
the weak link in the family we will have more matriarchy–along
with its familiar accompaniments: crime, educational failure,
illegitimacy, teen suicide, gangs and the rest.

1. 85% of all youths sitting in prisons grew up in a fatherless home
Fulton Co. Georgia Jail Populations, Texas Dept. of
Corrections, 1992. Statistics from other states show similar results.