Paying child support is the equivalent of paying three to four times your share for your kids’ needs. 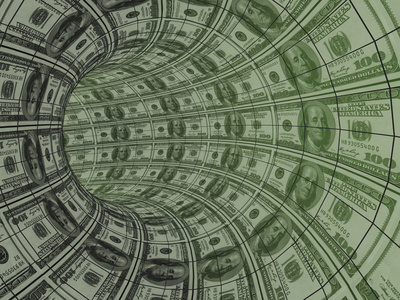 child support dollars © frenta – Fotolia.com All rights reserved.
Buried deep in the foundations of the theory, definition and defense of child support is the notion that children of divorce are entitled to live in a standard of living “to which they had become accustomed” while their parents were still married. This concept, routinely heralded by proponents of percentage guidelines as fundamental to the “best interest” of the children, is at the center of the misguided thinking that has developed in relation to divorce and the disdain that Americans have for divorced fathers.

First, it is simply absurd to suggest that the income which supported a family in an intact household can do so for two completely separate households following divorce and still maintain the same standard of living, type or quality of purchases and activities. Second, and even more important, is the way in which we insist upon recognizing only one of these two households as being of any consequence. That household, of course, is that of the mothers, who still receive primary custody in nearly 90% of the cases. Only for the mother’s home is the relationship between expenses and income evaluated. Only for the mother’s home are financial assessments assumed without any form of legal accountability.

These practices define for fathers, and in effect all of society, the lack of importance assigned to fathers as well as the growing disregard for their needs, concerns or hardships. There is no greater evidence of this than the way we relegate fathers’ support as “no consolation” and their attempts to remain involved with their children as mere “impositions.”

For fathers and their children, however, the message could not be clearer. Fathers pay support to the household in which their children reside; yet their children do not enjoy any legal protection as to how that money gets spent by their caregiver. Although fathers are bound by law to provide money, there is no legal consequence for mothers who fail to actually provide children with the child support money that is being transferred to her. She who chooses instead to spend most of the money on beer and drugs will find the law on her side.

Mothers may complain of shortages for things like clothes, bicycles, haircuts and dance lessons. Yet when child support computations are made, usually there is no such allowance made for those child expenses incurred by fathers in their own households. But what about the portion of a father’s income that he provides for his children in his own home? Here too he must maintain some reasonable amount of space, clothing, bedding, furniture, toys, etc., just as he pays for these things in their mother’s home.

Fathers who succeed in paying their mandated child support may be closer to paying three times their share of a split family’s expenses. The first time a father pays is the part the government takes to pay for mom’s residence, which includes a share for shelter, food, and all other needs. The second time he pays is for his portion, in his own home (which did not exist as a separate cost before). The third time he pays is the lacking portion of his own expenses that nobody sends him, unlike the support mom receives from him. Where dad was the sole wage earner in marriage, the situation is even worse. Since his income provided effectively 100% of the physical costs of his children, and mothers in this situation typically do not attempt to earn an income equal to the father’s following divorce, the father is essentially paying his portion yet a fourth time.

The financial burden of subsidized divorce is overshadowed by a far greater moral burden. Our society simply hasn’t developed any conscience regarding the plight of divorced fathers. Consider the isolation, desolation and despair some divorced fathers endure. Legally required to stand helplessly by, they watch in horror as a succession of strangers (mother’s boyfriends) benefit not only from the split family’s financial resources, but avail themselves of intimate access to the private lives of the children as well. Tragedy is the predictable and all too frequent result. Meanwhile, concerned fathers themselves are legally denied any access or control which might “inconvenience” the ex-wife.

Under such circumstances, we must pin our hopes on those fathers who act to intervene before things go too far. Yet when fathers refuse to pay or go so far as to make off with their kids, there are invariably authorities who feel affronted. There are cries for more legislation, stiffer consequences and attempts to control fathers even more. When mothers do the same, society comes immediately to their aid, trying to develop programs and funding in defense of whatever their needs might seem to be. If this is what we consider acting in the best interest of the children, society has a long, long way to go.