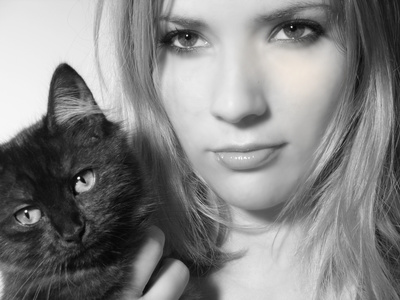 I quickly called friends who claim to know a lot about cats in spite of their lifelong allergy to the animals and asked them if its possible for a male cat to have a bunch of fat nipples.

Simon, they assured me, was a female.

One friend pointed out that cats, even female cats, don’t sprout nipples unless they are…I saw my life passing before my eyes…pregnant.

The idea, I believe, entered my brain, but my brain was Simonized. Simon was a guy cat. The nipples, aw, who knew in this day and age.

I went into cosmic denial, but Emily, our fourteen year old natural born crisis management specialist, took control of the situation. She packed Simon into a kitty carrying box which I didn’t even know we owned and carted him/her off to the vet, who made the bad news official. A. Simon was female. B. She was pregnant.

Shows you what they know. I don’t have a therapist.

Normally I would rather have a root canal than a family meeting, but this was an emergency. When a dad calls a family meeting, he has to wait until the most popular TV show comes on, then stand in front of the set and block everyone’s view.

“What DO you want?” the family chorused in unison.

“I’m allergic to cats. We have to get rid of them all.”

That stopped them. For two seconds there was silence except for the buzz of TV conversation behind me. Then they all laughed.

“Nice try, Dad,” they all said at once. “Now stop blocking the TV.”

“No, really. Look.” I showed them my rash. They pointed out that my “rash” was actually a collection of moles up near my elbow that I’ve had as far back as all of them could remember. Darn. I was hoping they hadn’t noticed my mole collection.

The weeks sped by. I was, thankfully, away from home the night of the big event. By the time I returned, I was road weary and tired. Cathy escorted me in to introduce me to the kittens, four wormy looking (if worms had fuzz) additions to the family.

Soon our kittens grew out of their wormy stage and began powdering the house with Kitty pixie dust. Nothing on earth is more adorable than kittykats, even to a hard-boiled, one cat at a time father of three daughters. I began to enjoy them. I had never been around kittens this young and was pleased they could hardly walk anywhere. They stayed in their box where Simon took good care of them. But that didn’t last. Soon it seemed like there were twenty or forty or sixty kittens scurrying in and out of every conceivable hole in the house. But by then, I was doomed. Their kitty pixie dust had done me in. I was as nuts as everyone else here in Catville. I didn’t even complain when one kitten got into the habit of crawling into bed at precisely 3:56 a.m. and using my leg for a scratching post. A kitten could eat the front seats out of the car and I’d have said, “isn’t that cute.” I felt like a complete idiot but I couldn’t do anything about it.

And then a miracle happened.

The girls found people who weren’t allergic to cats. Apparently the allergy goes into remission when the patient sees a baby kitten. We found homes for three kittens and by then my brain had gone so soft I agreed that we could keep one kitten. We are now a three cat household.

I sometimes wonder if this temporary insanity will wear off, like when I spot the kitten clawing the couch into shreds like a five year old with its own chain saw, or have to take all three of them and the bank account to the vet. When I think of it, I find myself sneezing, my eyes watering, a rash forming on my exposed skin.

One of my friends saw my red skin and nasal congestion. He suggested that I might be allergic to cats. Now he tells me.

Back to first page…