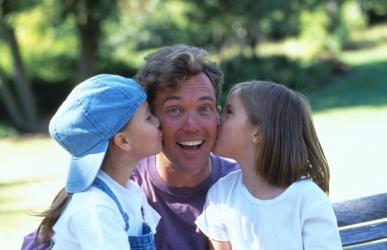 OK, fellow Dads, it is time to continue with my story. Fair warning though, if you didnt read part one, you will probably be lost!

I believe I left off around the time my children, ex-wife, and her husband moved in with me. As I said, I agreed to let them stay with me for a few days (they said they had a lot of money saved for an apartment) but that few days turned into a few weeks. By this time my girlfriend was long gone, I was single again, and having my kids here was a real blessing.

A little insight on my ex’s new husband: he was a biker/tattoo artist and into a few things that kids should not be subjected to. Dont get me wrong though, I liked the guy for some reason, and he was good to the kids (as far as I could tell). I also kind of believe that my ex-wife enjoyed living with the both of us. She always talked about it.

After about a month though, her husband left her for the biker crowd he had established. She was devastated. Now my ex-wife was living with me and the kids were too! It was hard to see her in pain (it was at this point that I realized that I still had feelings for her) but I also felt that I had my family back. We were not having sex. Most people thought we were (I wish) but I was only trying to keep her capable of being a mom, and I was busy trying to be a good dad. She would cry on my shoulder saying “you dont know what its like to lose your soul mate” but I definitely knew from a year and a half earlier when we split.

Anyway, as the days turned into weeks, I knew we were not going to be a couple again so I tried to let her get on her feet and get an apartment. Then I found out she was going to see her husband while I was at work. I gave her the ultimatum to stop seeing him or to leave.

On the very last day of April (the next day was my daughter’s ninth birthday) my ex-wife left to buy her a present and never came back. I was hurt for my daughter, but it didnt seem to bother her. Since the day my ex and I split up my daughter always vowed to be with me. She even went to the extent of going to her teachers to find out how old she had to be to petition the court to live with me. She was eight years old when she did that, and to this day I dont know where she got the idea.

Nevertheless, here was the big “daddy” test. Here I was, not even 27 years old yet, with four kids and no help. I didnt even have birth certificates or (most importantly) shot records. It was the scariest time of my life. I mean, I had always been there for them, but it was different knowing that I was all they had. My ex never called, and I heard that they had moved to Florida, and then Louisiana.

The months passed and the finances dwindled. My biggest fear at this point was that their mother still had full custody and could come and take these kids anytime she felt. I went to social services, child support, and child protective services, but they all told me that I had to file in New Jersey, where we were divorced. Again more runaround and paperwork.

I finally got my day in court, September 1997, but still had to travel to New Jersey for my custody hearing. The hearing went smoothly because their mother was still nowhere to be found to contest. I left my kids with my mother during the hearing because I had no idea what would happen. I was granted full custody and my child support obligation was discontinued.

I went to a local bar with a few friends that night to celebrate and guess who walked in? My ex-wife!!!

It turned out her husband had been caught cheating so she moved back to her family. She still had no idea why I was there. She found out after I got home to my babies though.

Of course after all this, I still had no records or received any support so I went back to child support enforcement. Walking into that office was very hard. I felt that every person who drove by figured I was “another deadbeat dad trying to stay out of jail.” The whole office was plastered with posters on “deadbeat dads.” The message seems to be that mothers are so unimportant that no on cares when they leave.

It turned out that the judge in New Jersey cancelled my child support obligation but never gave her the obligation. Now a new battle, but that will be in my next letter.

Thanks for listening, and God bless all dads!