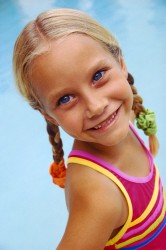 I’m a single Dad and have been for the last five years. I have a beautiful little six year old girl.

Now, I’m sure I’m not the perfect father. I try to do the best I can, but I’ve come to terms with that too. I mean, I don’t play Barbies as often as she’d like and sometimes after I’ve been working all day it’s hard for her to understand that Daddy just wants to sit down and rest. But we do like to play board games and talk about just about anything under the sun. She is a girl though and she’s caught me off guard quite a few times in the last three years.

We only do her hair in braids about, hmmm, maybe once a year if that often and the rest of the time we watch football together. Not all too sure if I’m doing okay with what it’s like to be a girl with her not getting much input from her mother. But we try and if it’s sporadic, well, I just hope it’s not completely skewed when she gets older.

She’s much more outgoing than I have ever been so I’m pretty sure her friends and other acquaintances will help fill in the gaps when it comes to the make-up and hair things. But I can’t deny the more private aspects of a young girl’s life, and it seems that I might be a little intimidated as well as very concerned about her knowing the truth. She needs to be able to separate school-yard myth from fact and when it comes to most of that, and well, let’s just say when I was in 5th grade they had a separate film for the boys on that day.

I have literally been single for the last five years so she’s never had much of a female role model to go by. Somehow, I feel that’s a failing on my own part. But that’s more my issue than anything else. I just never trusted much to allow another person in and the fact that I do have a little girl makes it quite a bit more difficult in meeting someone. Talk about the ultimate baggage, especially for a guy.

Anyway, there are times I actually sit here and think about what it is that’s missing for her. Dance class, fingernail polish, watching mommy put make-up on in the mirror, and maybe even a less critical shoulder to lean on once in a while. I’m not overly strict, but whenever it came to minor wounds I usually tried to tell her to be tough, rub some dirt on it and walk it out. Not particularly a womanly reaction, but she’s a lot tougher for it. Believe me, this girl’s had both of her pinky nails literally ripped of her little fingers at two different times by a door and a man-hole cover and she had less of a hard time with it than I did!

Have I stayed single? You bet. Not that I’m proud of it or anything. Believe me there are times where I feel so alone. But it’s just more of a concept of self and having done it for so long that you just can’t imagine putting your own problems off on anyone else.