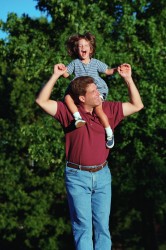 No matter what anybody says, it’s not easy raising children. Whether you have one child or ten, it’s going to be tough. Add to this the fact that you are a single parent, and your life is now ten times harder. In today’s world it’s not at all uncommon to see single moms raising their children, but when you are a single father…

I have had custody of my daughter for six months. These have been some of the best months in my life, the tough times and all. But during this time I have seen and heard more sexist comments about single fathers than I ever thought possible.

To begin with, the social system is mostly setup to help the single mother. It seems that none of the workers expect to deal with a single father. Here are some of the other situations I have come up against these past six months:

I received a letter from the county attorney’s office one day. They said
they would help me get child support from the father. At first I didn’t
think anything of it until I began reading the forms they wanted me to
fill out. All the information they put on the form about me was in the
mother’s section. The remaining section asked about a hundred questions
about the father. I later called and was told to scratch out where it asked
about the father and put mother.

On another occasion, I took my daughter to the doctor her mother had chosen for her. After sitting there for over an hour the doctor
came in and asked who I was. After telling him everything that had
happened and that I had custody; he turned to me, looked me in the eyes,
and said, “You can’t do this!” When asked what he was talking about
he replied “You’re male! You can’t raise a child by yourself. She has
to have her mother, not you.” I looked him in the eye and told him that my
daughter did not need a sexist fool as her doctor, and that we would
never darken his office door again.

I was later given WIC aid (women, infants, and children) to help buy my daughter’s formula. Things were going well until I went to a local grocery store to pick up some. I got to the checkout line, and when I handed the male cashier my WIC card he asked me where I got the card. He stated that such cards are not issued to men and said, “I know this isn’t yours.” My first reaction was to yank him across the counter, but I didn’t. Biting my tongue and reaching for my WIC ID, I was saved further argument by the manager stepping forward and checking me out rapidly. I could give you more examples of the discrimination that I have had to put up with, but it would take pages to do so.

I’m sure the majority of men are not prepared to handle raising a child on their own, and do not want to be. But there are also many of us who have the ability and desire to do so, especially when it means that our own offspring is loved and nourished by a parent rather than being abandoned to other people.

Women have fought for equal rights in the workplace, which they greatly deserve. Now what do we, as single fathers, have to do to receive equal rights as a parent? Are we going to have to fight for years to get beyond this? I agree that all children need a mother and father; unfortunately this is not always possible. I also believe that a single father can do just as good of a job raising his children as a single mother can. My daughter will be seven months old this month and is a beautiful healthy little angel. So to everyone who says a single father cannot raise a baby–I’ll see you in eighteen years at graduation!