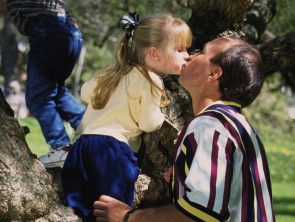 Growing up in the early seventies, divorce had yet to take its death grip on the nuclear family. The only child from a “broken home” that I had ever encountered in my
entire elementary school education was an interesting oddity to me. My classmates
seemed frightened by her, as if they might catch her condition. I had already lost my
father to death, so divorce seemed irrelevant. He had been gone since I was four, and although I occasionally plotted to ensnare Henry Fonda as his successor, my Mom and I seemed to manage adequately on our own.

In light of my rather benign feelings on fathers and divorce, I was surprised to find that as the years progressed, I had unknowingly formulated a garish stereotype of the divorced father in my subconscious. I clearly envisioned him strolling around his affluent digs, sporting a smoking jacket, sipping martinis. His two main objectives were avoiding alimony payments and keeping his children out of his perfectly coifed hair. I never once considered that this caricature might have any paternal feelings or rights.

By the time I was in my mid twenties, these scoundrels were fast becoming my co-workers and peers. This exposure forced me to rethink my misguided notions and try to look at the topic more objectively. Upon closer examination, I was startled to find that many of these men were truly wonderful fathers who suffered great anguish as a result of being unwillingly separated from their children. I had never pondered the devastating consequences of loosing the right to live with your offspring. Missing out on the milestones of your child’s life, as well as day to day living, leaves you feeling more like a visitor than a parent.

Despite popular opinion, a failed relationship does not necessarily translate into being a bad parent. Men seem to be punished for the break up of a family. It is often in everyone’s best interest for an unworkable marriage to be dissolved, but that does not mean that the importance of either parent should ever be diminished.

I attributed much of my new found enlightenment to a man whom I had met through a mutual friend. He had recently endured a grueling divorce which had virtually stripped him of his fatherhood. Family court had left him with a visitation schedule, a payment schedule, and a parent’s broken heart. Nevertheless, he was relentless in his love. He spent every possible moment afforded to him, caring for and loving his daughter, often at the expense of his own comfort. He turned down everything, from overtime to entertainment, that might interrupt one moment of his time with his child.

The first time I met him he had his cute blonde-haired, blue-eyed daughter close by his side. Perfectly groomed from head to toe, the only detail somewhat awry was that her baby fine hair was parted in a military fashion. “You comb her hair like a boy!” my friend teased.

“Maybe she needs a bow,” I ventured.

“She’s great just the way she is,” he announced, after giving her a quick inspection.

Our hostess finally got around to introducing us three. Jessica was a tiny female clone of her father. She eyed me
suspiciously and clung to her father in a protective gesture.

“My Daddy!” she proclaimed. The pained mask that shrouded her father seemed to melt away, revealing eyes that twinkled with adoration as he scooped up his precious bundle into his arms.

“It’s all right, baby,” he soothed. Unimpressed, she continued to eye me with caution.

I had long heard from my friend what a capable, loving father he was. Time went on, and I witnessed first hand the strong father/daughter bond they shared; an invaluable joy which I had never experienced in my own life. Their unwavering love and devotion to each other was miraculous to me.

“Here,” I thought, “is a great father!” Not unlike the image of my own paternal fantasy. I halfheartedly considered him for my mother, but I found my dream Dad a few decades too late – so, I married him myself. He got his much deserved second chance. I had finally found my own Henry Fonda, plus a wonderful stepdaughter. Best of all, I get to share them both with our three-year-old son.

This article first appeared in Life’s Landmine’s to Landscape’s and is copyright © 1997, 2009 reprinted by permission. All rights reserved.