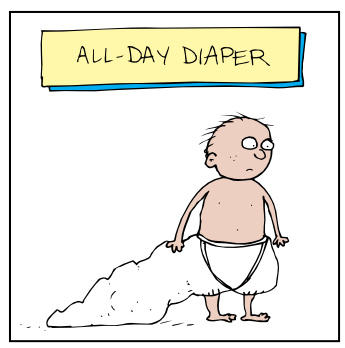 Although there seems to be an unspoken age of two years old for children
to learn to use the toilet, two year olds are not always developmentally
ready to toilet learn. I call it toilet learning versus toilet “training”
because we’re dealing with small children who need to learn how to maintain
bladder and bowel control, not dogs who need to be trained to perform tricks.

First things first, don’t bribe your kids with candy, television, or
rewards to use the toilet. We’re talking about giving kids candy for bowel
movements? How ridiculous. Almost as ridiculous as your boss offering you
an extra $5.00 a day if you only go to the toilet once during working hours.
Bodily functions aren’t easily bribed.

Bribery is never a good idea, for anything, including toilet learning.
No one likes being bribed to do things, especially if it’s something they
don’t want to do — children are no different. It’s much more positive
for a child to learn to use the toilet because she is ready rather than
because the parent is ready.

It’s important to remember that all kids do things at their own time
and their own pace. You cannot push your child into being ready to toilet
learn before she is ready. When she is ready she’ll do it herself. It’s
okay to encourage a child who wants to use the toilet, but a parent is
going to cause problems by pushing and forcing a small toddler to gain
bowel/bladder control on the parent’s schedule.

Life as a parent will be a whole lot more enjoyable for you and your
child if your time isn’t spent with a power struggle over toilet learning.
If you think of toilet learning as simply teaching your child (when she
or he is ready!) how to use the toilet you’ll be able to find the patience
to get yourself through a little longer with diapers.

You’re not going to “train” your child to use the toilet in
a week. She may, between two years old and three and a half years old,
decide she’s ready to learn herself — and it will likely take longer than
a week but, children who are allowed to toilet learn at their own pace
actually learn faster with less problems than children who are not pushed.

It’s not a competition between your kid and the neighbor’s
to see who learns to use the toilet first. We’re talking about body waste
here, not IQ scores, intelligence or a child’s (or parent’s) value.

My strong recommendation to parents of two and three year olds who are
thinking and worrying about toilet learning (yes, it is the parents who
are preoccupied with it) is to buy the child some nice underwear, allow
her to put it in a special place of her choosing, and tell her, “This
is for you when you’re ready to use the toilet.” If you’re really,
really concerned about toilet learning, buy yourself some nice underwear
too!

At some point, if your child wants to put her underwear on, let her
— and don’t get upset if she has an accident which she probably will at
first. At some point between two and three, most children begin to show
an interest in toilet learning all on their own. The best thing you can
do is to show patience, encouragement and respect for your child’s own
rate of readiness.

Really, most children won’t still be in diapers at 18 years old. There’s
no rush. It’s not a competition between your kid and the neighbor’s to
see who learns to use the toilet first. We’re talking about body waste
here, not IQ scores, intelligence or a child’s (or parent’s) value. If
your child’s not using the toilet at three, so what? It may mean changing
diapers, but you’ve done it for three years, you can handle doing it a
little while longer.

There’s a big push for children to grow up, forcing them to do adult
things, like using the toilet to eliminate waste. It’s unfortunate that
some parents spend so much time worrying about toilet use and so little
time actually parenting.