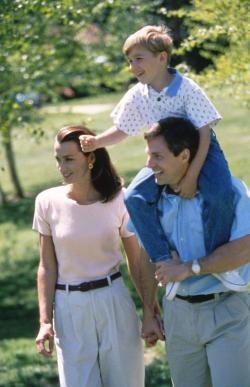 Take a look around. If you really want to, you can pick up the phone and
call China. If you want a package from Germany tomorrow, you need only click a
mouse or, at most, make a phone call. Technology’s ascension has changed not
only business, but the family as well.

Most children no longer play in the park
and hunt frogs, but rather watch television and surf the Internet. With the
resources like these available today, it seems that much of the developing
influence previously reserved for parents lies in the media. Consequentially,
our children are receiving their values from media moguls who are inspired by
the dollar instead of the heart.

As fathers, we have a responsibility to offer our children alternatives to
the values portrayed in video games and on
television. Much of what is available now in the media will only contribute to
the downslide of society into a state of moral apathy.

To reverse this process, we need to look at the problem on the most basic
level. ‘Parental involvement’ has come to mean that Mom helps with the homework
and activities. Finding the necessary time to spend with our children is,
indeed, more and more difficult because of the ever-increasing demands of a
competitive marketplace; but as society slips away into a moral state of
numbness, our greatest trump card as fathers may just be ourselves.

An increased amount of father-child involvement has proven to increase a child’s social stability, educational achievement, and even their potential to have a solid marriage as an adult (United States 4).

Fathers have a lot of responsibility. Much of their time is spent at work
providing for the family while their wives are at home. Because their time with
their children is limited, the question for fathers arises: In what ways can I
as a father influence my children for good? Just as women and men differ from
one another, so, too, are some of the influences they have on their children
inherently different. While mothers are often seen as the nurturer, fathers
often have an important role when it comes to playing with their children and
teaching them how to do physical tasks. Fathers tend to be more focused on
‘doing practical, educational things rather than talking about doing things.’
As they are more physical with their children than moms, dads play an important
role in developing their children’s motor skills and ethical limits in regard to

are also more curious about the world around them and develop greater problem
solving skills (United States 4).

The window of opportunity through which to provide that vital influence
starts very young. In fact, it’s safe to assume that dads have an effect on
their children even before the little ones begin speaking. One study showed
that at as early as five months babies had already been influenced by their
interaction with their fathers. Those infants that had more contact with their
fathers were more vocal and playful when placed with a friendly, but unfamiliar
male. (Horn 39) This is in large part due to the fact that children begin at a
very young age to establish patterns of trust and to form their social style.
Developing so early, it is not safe to assume that a child is immune to negative
influences before he can fully interact with his surroundings. When fathers
acknowledge this, they can guide their children to receive the influences of
their environment in a positive manner. A father’s guidance will help children
attain a higher level of social stability.

The well-liked are often those who conform to the trends of the crowd.
Although this is one way to be popular, there are other ways children gain
acceptance of their peers. When parents use the home to teach their children
how to interact with the world around them, their children develop better
relationship skills which will aid them throughout their lives. As they grow,
children will find that their ability to work together and communicate with
their peers brings the same kind of approval as simply conforming but with a
higher level of confidence. This social acceptance often leads to a greater
sense of self worth which plays a crucial role in academic achievement.

Excellence in both academic and social spheres is strongly linked to the child’s relationship with its father.

A study done by Kevin MacDonald found that when
children spent more time playing with their fathers, their teachers consistently rated them as well-liked by their peers (Horn 39). Children glean much more from their interaction with their fathers than we realize.

When fathers take an active role in their children’s lives, it not only helps

them to develop healthy friendships and achieve good grades, but it will play a
major role in their success as adults. Those adults who say their fathers where

highly involved in their lives attend more schooling and have a higher average
salary than those with lower father involvement (Peters 106). It is apparent
that a father’s interest in his child carries over to the child’s own ambition
to succeed. What then are we to do to assure that our children achieve the
success noted in these studies?

As a general finding, researchers note that although time with children is
important, it isn’t necessarily the amount, but the quality of that time that
matters. Especially when our time is limited, we need to make sure that the
opportunities to be with our children count. One example can also give you a
needed break from the hustle and bustle of work. Playing with your kids can be
a positive experience for both you and your children, especially when they are
young. This time needs to be free of distraction. Children tend to feel their
surroundings more than analyze them, so they notice when they don’t have the
full attention of their parent. Additionally, by playing with your children,
you allow them to release energy built up from school or other activities, and
this helps to develop a stronger personal bond. Simply through your eager
interaction with them, they will trust you more, creating the foundation for
healthy relationships throughout their lives.

Another opportunity for fathers, especially when their children are young, is
bedtime. Hopefully, the night has calmed down and there is an opportunity to
have quality time alone with the children. Simple things such as reading a book
or recounting the day’s events have the potential to make a child feel more
secure while deepening the father-child relationship. When children learn to
respect and love their parents, they are more willing to communicate and accept
the guidance they will receive later in life. Parents, in turn, respect their
children for their social maturity. Mutual respect promotes sensitivity and
understanding toward others and plays a crucial role in how well our children
are able to work together with others in all aspects of their lives (Horn
37).

Some of the fondest memories I have from my childhood are those spent working
with my father. It’s true that I wasn’t always excited to go work in the yard,
but once into it, I enjoyed the time it afforded me to get to know my father on
a more mature level. Working together gives you time to talk without having to
‘have a talk.’ It was through working side by side with my father that I really
developed a respect for him and his experiences in life. Because of these times
together, I am willing to turn to him for counsel. By nurturing our
relationship, my father prepared me to deal with others generously on a personal
level. His influence wasn’t only effective because of the wisdom that he
possessed, but more so because I knew that he really cared. His concern
motivates me to extend that same level of caring to those around me.

The world is demanding. As fathers, we don’t hold all of the answers to
repairing society. Despite all your attempts as a father, your children may
still have unresolved social issues; there is no cure-all in fatherhood. But as a
father, you hold some of the keys to unlocking the hopes and dreams within your
children. When they are grown, you hope that they look back on you as their
hero, someone who shaped their life for good. John Gottman, a family
researcher, tells us why it is that fathers have such a deciding effect on
their children’s lives, ‘We believe the reason fathers have this
extreme influence on their children is because the father-child relationship
evokes such powerful emotions in kids’ (Horn 39). Spending quality time with
your children can unleash this huge potential to guide them to happy, healthy
development.