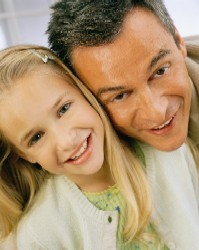 Erin is almost eight and, for now anyway, is still Daddy’s Little Girl. The emergence of each new Boy-Band however, shakes the foundation of my role as the most important guy in her life. But I can handle that. ‘N SYNC is where the dirty dishes go as far as I’m concerned.

Somewhere during the last four years or so, Erin figured out that I’m not perfect. It may have been something as benign as burning her bagel, but I’m confident there was a precise moment when she began looking at me with more scrutiny than wide-eyed adoration. And in a way, I am relieved. The pressure was killing me.

My three year-old son Shane has never had such fanciful imaginations of his Daddy. Gimme a break, Superman can fly. How can I compete with that? Becoming a father changed me so profoundly, it was as if I was born anew at the still tender age of twenty-four. My wife Lucinda guided me through the early tumult, until I was comfortable being vomited upon and could tell the difference between Desitin and Colgate.

Erin and I quickly bonded, and long before she could even crawl she was working her magic on me. She was my little girl.I protected her zealously, perhaps too zealously, as I immersed myself in my foolish pursuit of perfection. Had Erin been into Superman, I may have been compelled to take an admirable, if misguided, leap from the roof in blue tights and a bedsheet sewn to my shirt. (Big “D” on my chest.)

I was lucky. Erin liked Play-Doh. By the time she was three, I had bled profusely and almost lost a thumb while building her a swingset. I had graduated from trying to duplicate the Pyramids in my back yard, but I was not yet beyond power tool high-wire acts. Erin’s daddy was still one cool dude.

Erin’s first Christmas play came when she was four, and a new big sister to baby brother, Shane. I abandoned the concept of the Perfect Father after about a week of the two kid thing. To simply do my best would work out better for everyone. Lest I end up muttering and calling myself The Captain in a local “facility”.

But the epiphany came when Erin broke ranks from her classmates, found me in the crowd, and hugged me. She whispered “I love you, Daddy” and like lightning to a tree it hit me. She never needed me to be perfect. Some day I will dance with Erin at her wedding, perhaps to “Daddy’s Little Girl”. I won’t know precisely when The Backstreet Boys covered the photograph on her wall of the two of us at the beach. But it won’t matter. Because I’ll always be her Daddy, and she’ll always be my little girl. And I’ll always remember when I was the most important man in her life, when she was still enamored with the illusion that I had all the answers.

One summer night when she was four, I tucked her into bed, kissed her forehead, and whispered goodnight. Erin grabbed me by the arm and asked me the question I will always remember. “Daddy…do dragonflies sting?” I was all out of life-lines. I smiled to mask my waning omnipotence. I didn’t know for sure, and so I offered the best answer I could, hoping it would suffice. “I don’t think so, honey.” Erin wasn’t satisfied with my lack of conviction. “Daddy, do they?” “I don’t think so.” This tennis match continued until we were reduced to giggles, but Erin wasn’t going to sleep without an answer.

Finally, I knew I was going to have to commit myself, right or wrong, so I gave her the answer I knew she wanted, and the one I thought was right. “No, dragonflies do not sting, Erin.” And for now, your Daddy still has all the answers. Because I know that dragonflies don’t sting.

At least I’m pretty sure they don’t.